B - The Underwater Bubble Show

Due to travel delays arising from Wednesday’s winter storm and subsequent shutdown of Denver International Airport, the “B” Underwater Bubble Show performance that was originally scheduled for 2 p.m. March 16 has been delayed by one hour. This performance will instead begin at 3 p.m. on March 16. Tickets for the 2 p.m. performance will be honored at the 3 p.m. performance so there is no need to obtain new tickets.

Inspired by childhood standards like Alice in Wonderland, The Little Mermaid and Peter Pan, "B" The Underwater Bubble Show is a modern fairy tale. The show follows Mr. B, a creature of modern habits who feels like the world is always moving too fast. The office worker discovers a little aquarium that appears like magic inside his briefcase and gradually becomes enchanted by the wondrous underwater world of Bubblelandia, which is full of seahorses, dragon fish, starfish, mermaids and other creatures.

Taking cues from Cirque du Soleil, this visually spectacular show incorporates the latest in stage technology with lasers, low ground smoke, flying foam and a spectacular use of soap bubbles in various artistic ways which simulate a breathtaking underwater atmosphere. 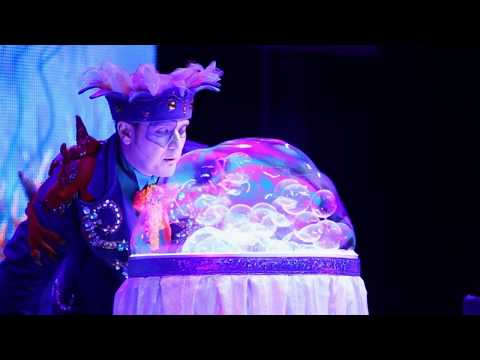