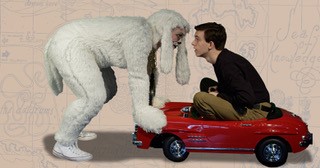 "According to local ordinance 574381-W in the Doldrums laughter is frowned upon and smiling is permitted only on alternate Thursdays.” In the Doldrums there may be no laughter but in Debut Theatre Company’s performance of The Phantom Tollbooth, laughter abounds!

When bored Milo, who has plenty of time, finds a mysterious tollbooth and a toy car in his bedroom, he finds himself unexpectedly transported to the curious Land of Wisdom. There he travels from the wordy Dictionopolis to the practical Digitopolis. When he meets King Azaz the Unabridged, he finds himself tasked with freeing the Princesses Rhyme and Reason who have been locked away in the Castle in the Air for being too sensible.  Aided by the friendly watchdog, Tock, and the curmudgeonly Humbug, together they must face the ear shattering Dynne, the lethargic Doldrums, a Word Snatcher, a Senses Taker, and a multitude of terrifying demons as they race to complete their mission.  Whether Milo is mining for numbers, or literally eating his words at a feast, The Phantom Tollbooth is fun for all ages!   So pay the toll and enjoy the adventure of bravery, knowledge and imagination as the quest to the Castle in the Air begins!