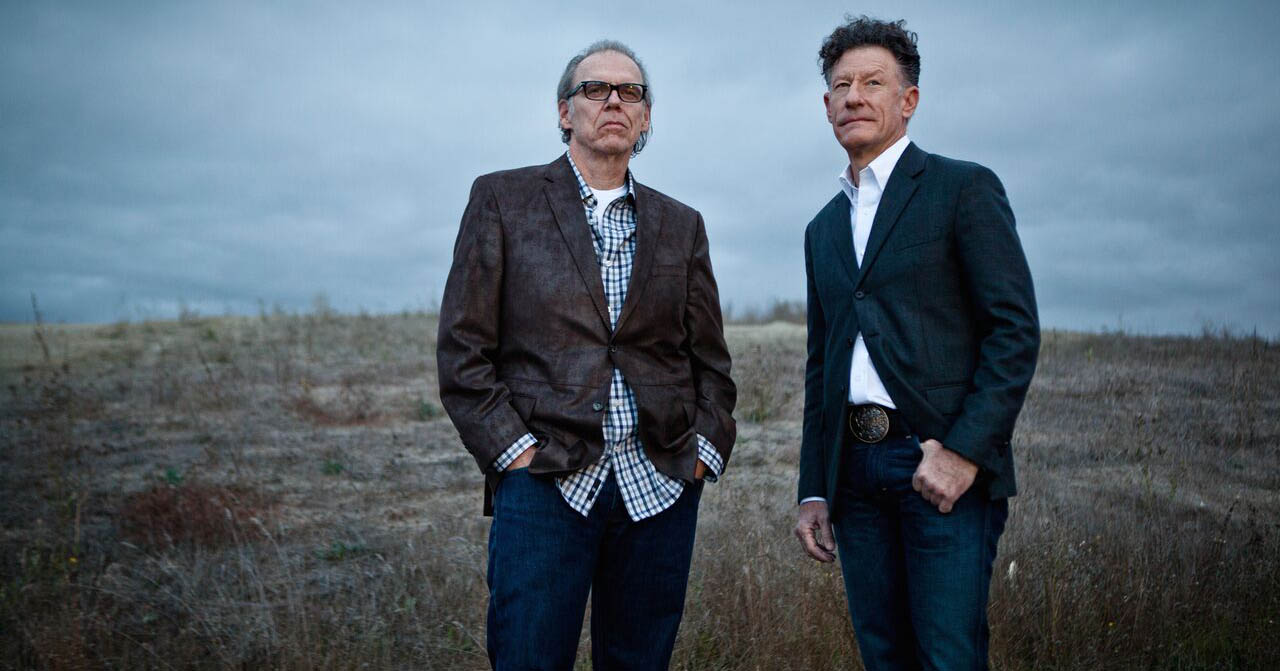 An Evening with Lyle Lovett and John Hiatt

LYLE LOVETT
A singer, composer and actor, Lyle Lovett has broadened the definition of American music in a career that spans 14 albums. Coupled with his gift for storytelling, the Texas-based musician fuses elements of country, swing, jazz, folk, gospel and blues in a convention-defying manner that breaks down barriers.


Whether touring as a ‘Duo’ or with his ‘Acoustic Group’ or his ‘Large Band’, Lovett’s live performances show not only the breadth of this Texas legend’s deep talents, but also the diversity of his influences, making him one of the most compelling and captivating musicians in popular music.


Since his self-titled debut in 1986, Lyle Lovett has evolved into one of music’s most vibrant and iconic performers. Among his many accolades, besides the four Grammy Awards, he was given the Americana Music Association’s inaugural Trailblazer Award, and was named Texas State Musician.


His works, rich and eclectic, are some of the most beloved of any artist working today.


JOHN HIATT
“You know how writing goes for me,” John Hiatt says, offering a glimpse into his creative process. “I get a couple of lines going, and then I just tag along as the songs start to reveal themselves. You’ve just gotta jump inside and take the ride.”


Hiatt has been on that ride—as have we all, tagging along right beside him—for more than four decades now. In fact, since the release of his 1974 debut, Hangin’ Around the Observatory, rarely has more than a year or two passed without a new Hiatt collection hitting the shelves. But after wrapping up a year of touring in support of 2014’s Terms of My Surrender—the singer-songwriter’s 22nd studio effort overall—he found himself, for the first time in a long time, unsure of what would come next.


Not that he panicked. “I’ve been lost before,” Hiatt says, with the self-assurance of a man who has experienced a thing or two over his long and varied career. “Although usually I have some sort of notion or clue where to go.”


But this time? He laughs. “I had no sense whatsoever.”


As for the cause of this uncertainty? “Life, really,” he says. “Or just changes in life. My wife and I made the decision to sell our farm [in Williamson County, Tennessee] and move back into Nashville. I wanted to spend more time with my family. I was aging, with all that entails or doesn’t entail. Stuff was just happening.”


During this period of transition Hiatt did manage to compose a new song—a dusty, road-worn meditation titled “Robber’s Highway.” But the lyrics he penned (“I had words, chords and strings / now I don’t have any of these things”) sounded almost ominously prophetic. “I was just thinking in terms of somebody who’s out there hammerin’ away with his music, wondering what it’s all coming to,” Hiatt explains. “And maybe the songs just aren’t there anymore…”


Fast-forward a few years, however, and it’s clear that, for Hiatt at least, the songs are still very much there. And The Eclipse Sessions, his newest collection, offers up his strongest set of ‘em in years. Long celebrated as a skilled storyteller and keen observer of life’s twists and turns, Hiatt can get at the heart of a knotty emotion or a moment in time with just a sharp, incisive lyric or witty turn of phrase. And the 11 tracks presented here, from the breezy opener “Cry to Me,” to the stark “Nothing in My Heart,” the lost-love lamentation “Aces Up Your Sleeve” to the rollicking “Poor Imitation of God,” demonstrate that the singer-songwriter, now 66, is only getting better with age, his guitar playing more rugged and rootsy, his words wiser and more wry.


And while he may have started slow this time around, once Hiatt got going, the material that would eventually comprise The Eclipse Sessions came quickly. Following his move back to Nashville in 2017, he recalls, “I put together a little area in the basement of our new house, a space for me to write in. And the songs just started coming again.”


From there, things picked up steam. Hiatt’s longtime drummer, Kenneth Blevins, suggested they visit a friend of his—musician Kevin McKendree—at his farmhouse studio on in Franklin, Tennessee. There, Hiatt, Blevins and bassist Patrick O’Hearn set up shop and began recording the new songs as a trio, with McKendree producing. “I was on acoustic and singing, Kenneth was on a small drum kit and Patrick was on electric bass or upright bass as the song required,” Hiatt recalls.


After the basic tracks were done, he continues, “Kevin would put either piano or organ on, and his son, Yates [McKendree], who’s just an incredible musician, would come in and add some electric guitar. But the main tracks were me, Kenneth and Patrick doing everything together live, including vocals.”


This stripped-back approach put the focus right where it ought to be—on Hiatt’s guitar and voice. “I want to push what I do up there in the mix, because it’s all I got,” he says, then laughs. “Might as well go all in at this point!”


Hiatt certainly does go all in on The Eclipse Sessions. There’s a grit to these songs—a craggy, perfectly-imperfect quality that colors every aspect of the performances, right down to Hiatt’s vocals, which are quite possibly his most raw and expressive to date.


“They ain’t pretty, that’s for sure,” he says about the creaks and cracks that punctuate his phrases in songs like “Poor Imitation of God” and “One Stiff Breeze.” “But I don’t mind a bit. All the catches and the glitches and the gruffness, that sounds right to me. That sounds like who I am.”


It’s the sound of an artist not only living in but also capturing the moment. Which, in Hiatt’s estimation, places The Eclipse Sessions in a lineage alongside two of his greatest works—1987’s mainstream breakthrough Bring the Family, which sprung from an impulsive four-day session with an all-star combo led by Ry Cooder, and 2000’s Crossing Muddy Waters, an unplanned and largely unplugged effort that set Hiatt on the rootsier path he’s still pursuing today.


“The three albums are very connected in my mind,” Hiatt says. “They all have a vibe to them that was unexpected—at least to me, anyway. I didn’t know where I was going when I started out on any of them. And each one wound up being a pleasant surprise.”


To be sure, pleasant surprises abounded during the recording of The Eclipse Sessions—and not only inside the studio. True to the album’s title, Hiatt and his band were hard at work on the very day—August 21, 2017—a solar eclipse traveled the length of the continental U.S. “I think we recorded three songs that day, and then we took a break to go outside and watch everything happen,” Hiatt says.


The eclipse itself, of course, was hardly unpredicted. But what Hiatt observed amongst his fellow Nashvillians during that moment of totality—his city was one of a few spots in the U.S. to be plunged into near complete darkness—did give him pause.


“It seemed everything stopped for a minute or two,” he says. “It was like a magical little bit of time, a harmonic convergence or something. Like everybody was on the same page—and that page wasn’t Facebook! So it reminded me of old times in Nashville.”


He laughs. “Getting nostalgic for the old days, as old farts do…”


Old fart? Not Hiatt, not now. He’s more the guy in The Eclipse Sessions’ “Over the Hill”—“long in the tooth” but still taking “huge bites of life.” Hiatt can only smirk about that line. “I thought that was a funny one,” he says. “Like, ‘This is a kick… I’m trying to make aging sound appealing!’ ”


Or the troubadour in “Robber’s Highway,” peeling himself out of a hotel bed in order to make it to the next show. “We’ve all had nights like that—‘Can’t feel the fingers of one hand / last night felt like a three-night stand,’ ” Hiatt says, quoting the song’s first lines. “I mean, that’s a laugh amongst most of us who have ever been out there on the road. But playing music is the most wonderful gig in the world. It’s just that the cost is high. I don’t know that people necessarily know the price.”


It’s a price that Hiatt willingly, and for the most part, quite happily, continues to pay. Since 2000 he’s been on a remarkable late-career run, releasing nine acclaimed studio albums and embarking on numerous tours in the U.S. and abroad. In fact, even as he prepared for the release of The Eclipse Sessions, his tenth record this century, Hiatt could be found traveling the robber’s highway in Europe with his old backing band, the Goners (featuring slide guitarist extraordinaire Sonny Landreth) for a tour celebrating the 30th anniversary of his 1988 album, Slow Turning.


“It’s been cool to be out with the original band and playing those songs again,” Hiatt says. “Because for me it was one of those records that helped to build up the following I’ve had for the past 30 years. We really took a leap with that one.”


As for whether Hiatt could have ever imagined that, at 66 years old, he’d be experiencing yet another great leap with The Eclipse Sessions?


“I would never have imagined any of it,” he responds. “If you’d had told me this 40 years ago I would’ve just said, ‘C’mon…you’re pullin’ my leg!’ So to have this kind of longevity, and still be healthy and have a wife and family and kids and everybody’s doing well… no, I would never have dreamed it. I would have thought it’d gone away a long while ago.”


Gone away? Hardly. In fact, with The Eclipse Sessions, Hiatt might very well be gearing up for yet another new beginning.


He considers the possibility.


He laughs again. “Either way, it’s good with me.”