Together with cellist Saskia Rao-de Haas, Sitar master Shubhendra Rao takes east-west musical collaboration to another level by exploring a new musical language that is both avant-garde and traditional. Shubhendra, an unmatched master of his instrument, is described by India’s Gateway Magazine as “a thinking musician, constantly searching to carry his instrument beyond conventional boundaries”, and his music as “an experience for his audience that is not aimed at titillating the senses, but to seize the soul”.

Saskia de Haas, a classically trained cello virtuoso from the Netherlands, is a pioneer in the introduction of the Indian cello to classical Indian music. Creating a cello with one extra string plus ten resonation strings, which suits the demands of playing classical Indian music, she designed a cello that can be played on the floor in order to join her fellow Indian musicians.

Joined by Aditya Kalyanpur on the tabla, the two musicians bring the Indian sitar and Indian cello together to perform as an Indian classical music duet. Sharing their enthusiasm for musical exploration, Shubhendra’s masterful sitar playing combined with Saskia’s mastery of the innovative Indian cello led them also to the creation of new compositions—original, vibrant amalgams of classical traditions from the East and West, drawing from an infinite world of folk traditions and rhythms.

“An intriguing duo. A work of outstanding originality, conveying the fullness of an entire orchestra—a sound as evocative and rich as life's journey” —The Edinburgh Press (Scotland)

“The duo makes music that has the audience wowing and the critics raving” —Hindustan Times (New Delhi, India) 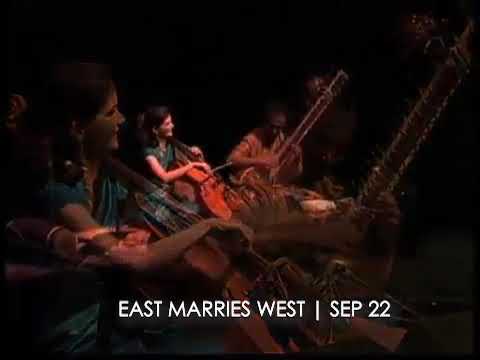