The unique opera duo ACTE II was suddenly launched into national prominence after delivering a captivating performance on NBC’s #1 summer show America’s Got Talent. The duo received a standing ovation by the celebrity judges who then selected it as one of 10 acts to perform live at Radio City Music Hall in New York City. The duo has quickly become known for pushing the boundaries of classical music with exciting and original concerts. ACTE II’s programming, which has been described as “something close to perfection,” runs the gamut of vocal music ranging from art songs, opera and musical theater, to jazz, spirituals, gospel and popular music.

ACTE II regularly appears throughout the United States with performances ranging from some of America’s most beloved venues to community outreach programs, putting their mission statement “to connect with people around the globe, one community at a time” into action. The duo has recently appeared at the Baruch Performing Arts Center in New York City, in addition to traveling throughout the US to Mississippi, Kansas, South Dakota, Wisconsin, and Indiana. They made their Lincoln Center debut in historic Avery Fisher Hall while on tour with the American Spiritual Ensemble, performed for the NBA game as guests of the Brooklyn Nets, presented the highest grossing concert yet on the Fordham at Four Concert Series of the Bronx, NY, and have made countless special guest appearances around the United States.

ACTE II came about when Olanna and Ashley Renée joined forces to raise money through concert work, in order to afford travel in Europe for singing opportunities. They soon realized how much they enjoyed working together, and that they had the ability to create something special. As a result, their purpose changed from funding an audition tour to creating new and exciting programming that would allow them to connect with audiences near and far. Even with all of the wonderful new opportunities which have ensued, the duo finds it essential to give back to the community. They have presented opera workshops, partnered with organizations to reach at-risk teens and most recently performed a “Popera” concert for New York Presbyterian Morgan Stanley Children’s Hospital. Their multi-genre, versatile repertoire continues to drive them towards their ambitious goals of becoming the world’s leading classical singing ensemble, while providing entertainment, community outreach, music education, and inspiration.

The pair first met while studying voice performance at Dillard University in New Orleans. They later attended graduate school together at the University of Oklahoma where they first shared the stage in Strauss’ Die Fledermaus. Throughout their studies, both Ashley Renée and Olanna received high honors in national and international vocal competitions in the United States, Europe and South America. They have also been selected as promising young artists by some of the classical arena’s most prestigious programs including Music Academy of the West, Taos Opera Institute, AIMS in Graz and Opera New Jersey’s Victoria J. Mastrobuono Emerging Artist Program.

"...you had everyone on the edge of their seat."—Mel B, America's Got Talent 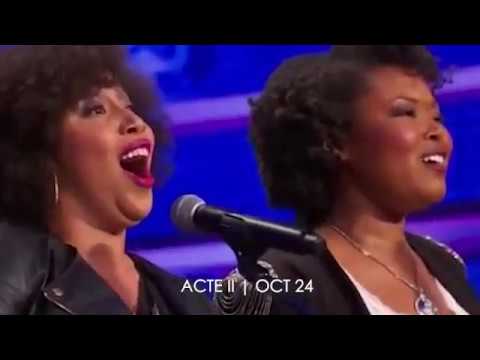